Sengan-en and Shoko Shuseikan －Stately home and gardens of the Shimadzu clan overlooking active volcano Sakurajima. Enjoy the spectacular view and discover one of Japan’s most fascinating World Heritage Sites.－

In 2015 a group of historic locations around Japan were inscribed as a UNESCO World Cultural Heritage Site called “Sites of Japan's Meiji Industrial Revolution: Iron and Steel, Shipbuilding and Coal Mining”. One of these sites was Sengan-en, house and gardens of the Shimadzu family. Let’s take a stroll around the area and find out how a traditional Japanese house and garden are connected to the modernization of Japan.

Sengan-en was built as a second residence of the powerful Shimadzu clan in 1658 by the 19th head of the Shimadzu family, Mitsuhisa. The incredible view of Sakurajima from the gardens is one of the main attractions in Kagoshima City. The grounds cover 50,000m² and present a rich tapestry of flowers and plant life that changes with each season. The house at the center of the gardens and the neighboring Shoko Shuseikan Museum tell the fascinating 800-year story of the Shimadzu family and their role in the modernization of Japan. Sengan-en and the Shoko Shuseikan Museum were inscribed as a UNESCO World Cultural Heritage Site in 2015 for the contribution made in this area to the modernization of Japan.

Explore the vast grounds, enjoy colorful flowers, and find peace and harmony at the Shimadzu shrines 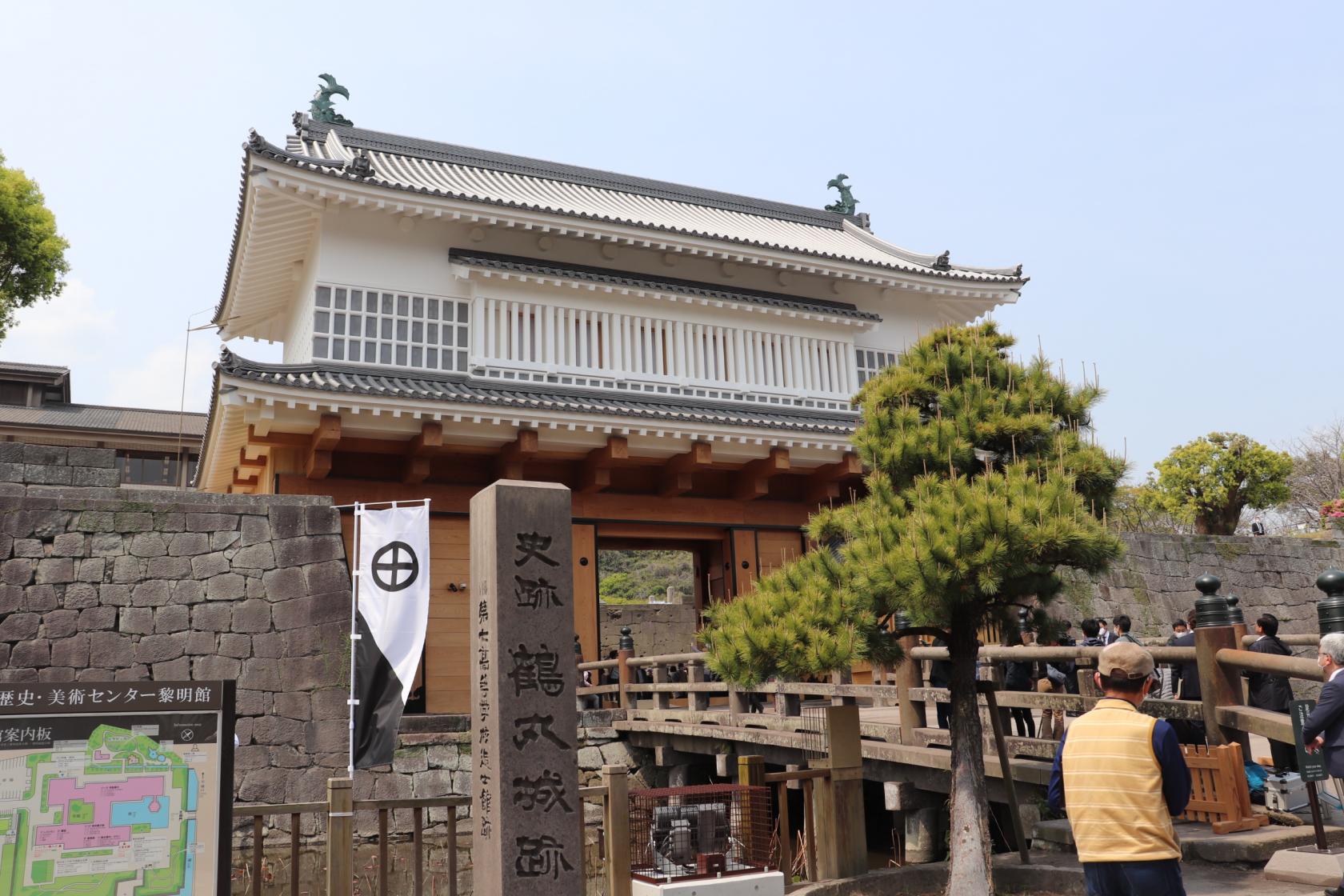 Explore the main residence of the Shimadzu clan – Kagoshima Castle!

Sengan-en was one of the second residences of the Shimadzu family. The main residence for the lords of the Shimadzu clan was Kagoshima Castle, built at the foot of Shiroyama in 1601 by Shimadzu Iehisa. The castle was also known as Tsurumaru Castle, as the layout of the grounds was said to look like a crane spreading its wings. After the feudal domains of Japan were rescinded in 1871 the Shimadzu family made Sengan-en their full-time abode. The 29th head of the Shimadzu family, Tadayoshi spent 10 years living at Sengan-en. While the main building of Kagoshima Castle no longer remains, the impressive castle wall and moat remain giving us a glimpse of how a powerful feudal lord would have lived. Make sure to explore both the castle remains and Sengan-en for a true taste of the history and culture of Kagoshima!

The Shuseikan was Japan’s first modern factory complex, consisting of a reverberatory furnace, a blast furnace, a glassworks, a spinning mill, and a machinery factory. The 28th head of the Shimadzu family, Nariakira was worried by the colonization of Asia by western nations and felt that Japan needed to modernize in order to remain independent. He ordered the bamboo grove next to his house and gardens at Sengan-en to be cleared away and started the first large scale industrialization project in Japan. Discover how this incredible feat was achieved at the Shoko Shuseikan Museum, housed in the oldest stone factory building in Japan.
Then head across the road to see the delightfully designed Ijinkan. This quaint western colonial style building was constructed to house British engineers who had been employed to teach spinning to workers in Kagoshima. See how the samurai of Satsuma were not only warriors but also skilled craftsmen. This building is also a key location in the development of the Japanese silk trade, one of the major factors in Japanese modernization.

Heroes of the Modernization of Japan – Shimadzu Nariakira and Ishikawa Kakutaro

Shimadzu Nariakira’s Vision for Japan
Shimadzu Nariakira held an interest in western culture from a young age, likely due to the influence of his great grandfather Shigehide. This knowledge of the outside world allowed Nariakira to see the gap in economic and military might between Japan and the west. Worried that Japan would be colonized by western nations making inroads into Asia, Nariakira started a modernization project called the Shuseikan based on the slogan fukoku kyohei, meaning enrich the country and strengthen the military. Let’s find out the plans Nariakira put into action and how they affected the modernization of Japan!

Foresight borne out of Kagoshima’s proximity to Asia
In the late 19th century western nations began the colonization of Asia. The Satsuma domain, located at the southern tip of Japan was naturally the next place that western ships would likely arrive, following trade routes established in the age of exploration. After the second Opium War and the partial colonization of China by Britain, Nariakira realized that without rapid development Japan would be no match for the foreign nations rapidly approaching his domain. It was for this reason that he ordered the construction of the Shuseikan - Japan’s first modern factory complex.

Strengthening the military, creating rich culture
Nariakira ordered the production of modern cannons and ships, and in 1852 began the construction of a reverberatory furnace to melt down large quantities of iron cheaply. Nariakira also tasked his men with creating high quality products for export overseas such as Satsuma-ware pottery and Satsuma Kiriko crystal glassware. Unfortunately, Nariakira’s dream was never fully realized due to his sudden death in 1858. The Shuseikan had been in operation for 7 years, but without its visionary leader, the scale of the modernization project was drastically reduced.

Recognizing the military might of Britain in the Bombardment of Kagoshima
In 1863 a British merchant called Charles Lennox Richardson was killed by Satsuma samurai outside the village of Namamugi close to Yokohama for crossing in front of the procession of Shimadzu Hisamitsu. In retaliation, Britain sent seven warships into the Kagoshima Bay the following year to demand reparations. Battle ensued and although there were few casualties on either side, the powerful British Armstong guns burned much of Kagoshima to the ground.
This display of force was enough to show the people of Satsuma that work carried out at the Shuseikan had true value, and Nariakira’s younger brother Hisamitsu and his son Tadayoshi restarted the work towards modernization. Many young retainers began earnestly learning about western scientific knowledge and technology, and one of them was Ishikawa Kakutaro, one of the key players in the founding of the Japanese silk industry.

The Satsuma domain produced many of the great leaders that brought Japan into the modern world during the Meiji period (1868-1912). One of these men was Ishikawa Kakutaro. Japan was protected from colonization by the west by the modernization project started by Nariakira and his contemporaries, and it is no exaggeration to say that the development of spinning mills played a large part in this success. High quality Japanese silk was particularly important, and it soon became a highly sought-after global commodity. One of the men behind this success was Ishikawa Kakutaro. Kakutaro learned the importance of spinning from Nariakira and went on to establish mills not only in Kagoshima, but also across the rest of Japan. It was due to his work and the engineers of Kagoshima that the golden age of Japanese silk was possible.

Nariakira and the birth of the Japanese national flag, the Hinomaru

In 1863, Nariakira completed the construction of a western style ship and suggested to the Tokugawa Shogunate that the Hinomaru should be used as the symbol to represent Japan internationally. Nariakira reasoned that it would be difficult to distinguish between friend and foe on the open seas. Compared to smaller Japanese vessels which were easily identifiable for their unique shape and single sail, western ships looked similar and needed identification. The Shogunate accepted this reasoning and began using the Hinomaru as the symbol for Japan from 1854 onwards.

During Meiji period (1868-1912) the spinning industry was the backbone of Japanese modernization. Ishikawa Kakutaro was a Satsuma samurai and a scholar of Dutch studies. He learned the importance of the spinning industry from his lord, Shimadzu Nariakira. After Nariakira’s death Kakutaro convinced heir Shimadzu Tadayoshi to import spinning machinery from Britain and invite British engineers to teach local workers how to operate it effectively. The Satsuma samurai, who had managed to achieve a degree of industrialization on their own through trial and error were quick to learn and managed to pick up the skills needed to operate the machinery in just one year. During the Meiji period the samurai of Satsuma spread this knowledge all over Japan, greatly contributing to the modernization of Japan.

The road towards the Japanese silk brand

In 1865 a mission from Satsuma landed in Britain and with the help of a talented young samurai named Godai Tomoatsu were able to secure the purchase of spinning machines and invite engineers to Japan to offer instruction in their operation. Construction on a western style residence (Ijinkan) for the engineers was started to the west of the Shuseikan complex. In 1867 Japan’s first western style spinning mill was put into operation here in Kagoshima. Nariakira’s vision of becoming a strong and modern nation had been set underway, thanks to the efforts of Satsuma samurai like Okubo Toshimichi, Terashima Munenori, Kuroda Kiyotaka, and Ishikawa Kakutaro, all of whom would go on to become leaders in the Meiji government.

Close-up: Ishikawa Kakutaro - One of the leaders of modernization in Satsuma and across the rest of Japan

Inspired by the quality of western raw silk
Nariakira first employed Kakutaro as a Dutch scholar translating foreign textbooks into Japanese so that experiments with new technology could be carried out at Kagoshima Castle. Nariakira was deeply impressed by the high quality of western silk and handed Kakutaro a spindle of silk and a textbook on the subject, ordering him to carry out research that would lead to the development of the wider silk trade in Japan.

Fulfilment of Nariakira’s dying wish – construction of spinning mills all over Japan
After Kakutaro finished the development of the Kagoshima Spinning Mill he assisted with the construction of similar mills across Japan. The Tomioka Silk Mill in Gunma Prefecture is perhaps the most famous. Kakutaro was therefore involved in the construction of two of the locations related to the Sites of Japan’s Meiji Industrial Revolution World Heritage Site.

The Tomioka Silk Mill – Largest in the world

In 1859 the port of Yokohama was opened to the world and foreign trade began with raw silk being one of the principal goods on the market. Demand for raw silk had boomed in Europe where spinning machines had become commonplace after the industrial revolution.

Following the Meiji Restoration in 1868, the Japanese government planned on the development of cottage industries to provide a boost to the economy and began the export of raw silk in order to acquire foreign currency. This required a leap in both the quality and quantity of raw silk being produced. A government run silk mill was built in Tomioka City, Gunma Prefecture to spur on production. The facility was the largest of its kind in the world.

Daughters of high-ranking samurai families were selected to work in the factory, and were taught the technical skills of spinning silk. These women then returned to their home Prefectures and taught others the basics of spinning to spread their knowledge nationally.

Kakutaro was employed as a governmental advisor running the mill and assisted with teaching technical skills to the workers. Follow the thread of the silk industry back to its roots and the start is in Kagoshima with the early discussions that took place between Shimadzu Nariakira and his devoted retainer Ishikawa Kakutaro.

Sharing knowledge and creating the foundations of national industry

Spinning was the core industry that spurred on the modernization of Japan during the Meiji period (1868-1912). The foundations of the spinning industry were laid by Shimadzu Nariakira and his retainer Ishikawa Kakutaro. The Kagoshima Spinning Mill was constructed in 1867 and was rapidly followed by mills in Sakai (1870) and Kashima (1872), forming the core of the Japanese spinning industry.

Mills in Aichi, Hiroshima, and at sites all around the country were rapidly built and soon went into operation. Kakutaro had a hand in the development of all these sites and worked tirelessly to spread the knowledge that he had gained in his homeland of Satsuma with the rest of Japan.